A city that shimmers in the divine glory of The Golden Temple, showcases the poignant independence struggle, and marks the emotional border crossing between India & Pakistan; Amritsar is a fascinating combination of history & divinity. Historical sites, grand religious edifices, mouthwatering food, colorful bazaars and heartwarming hospitality are the insignia of this gorgeous city in Punjab.

The holy seat of the Sikhs, this magnificent Sikh temple is a picture of divine serenity. Its gold-gilded dome, stunning marble structure, shimmering waters and an aura of tranquility are quite magical. The temple welcomes followers from all religions, castes and countries with open arms. Visit the awe-inspiring Golden Temple, watch its mesmerizing reflection in its waters and soak in its spiritual aura of the place.

A moving emblem of patriotism, this park commemorates the martyrdom of hundreds of men, women & children who were shot dead by the British colonists during a peaceful protest in 1919. The bullet-marks ridden walls, the martyr’s gallery and the eternal flame burning in the park remind us of their supreme sacrifice in the cause of Indian independence.

The palace-converted-museum houses archives, paintings, miniatures, coins & weapons prevalent during the reign of Maharaja Ranjit Singh. The Panorama, built near the palace, features visual documentation of his life in the form of paintings, three-dimensional figures and multimedia presentations.

Dedicated to Goddess Durga, this temple takes architectural inspiration from the Golden Temple. Built in white and gold in the middle of a temple tank, this temple is a much visited Hindu shrine in Amritsar.

This enchanting bird sanctuary, located on the confluence of rivers Sutlej and Beas, is a birder’s paradise. The sanctuary is famous for its Duck Tours where you board a waterbus to explore the wetlands. The sanctuary is home to a wide variety of birds like bellied warbler, white-browed fantail, yellow-legged gull, brown shrike, common wood shrike and white-tailed stonechat.

Around 30kms from Amritsar, Wagah is the site of the >Radcliffe Line carved during the partition of India in 1947 and forms the lone road border between India and Pakistan. The Beating the Retreat Ceremony at the border, where the flags of both countries are lowered and border gates are closed for the day, is a compelling experience.

Amritsar is known for its delicious food. Savor the delicious Kada Prasad in Gurudwaras, gobble down buttery Dal Makhani, stuffed Amritsari Kulche, Butter chicken, Amritsari Fish and complete your meal with the famous Lassi & Kulfi of Amritsar- the experience is drool worthy!

Amritsar is best visited in winter’s months from October to March.

How to Reach Amritsar

By Air- Amritsar International Airport caters to air traffic from domestic and select international cities.
By Rail- Amritsar is well connected with major Indian cities by a network of direct & express trains.
By Road- A well-maintained network of roads & highways connects Amritsar to the major cities in India.
Book our Sikh Pilgrimage Tour and Golden Temple Tour Packages and soak in the divine aura of Amritsar. Enjoy the mouthwatering food, walk through its old bazaars and relish the cultural extravaganza of this lively city.

Foothills of Himalayas with Golden Temple 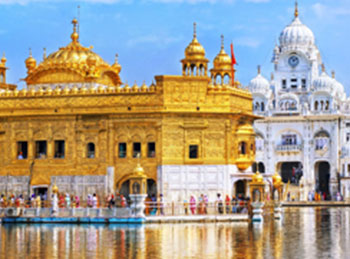